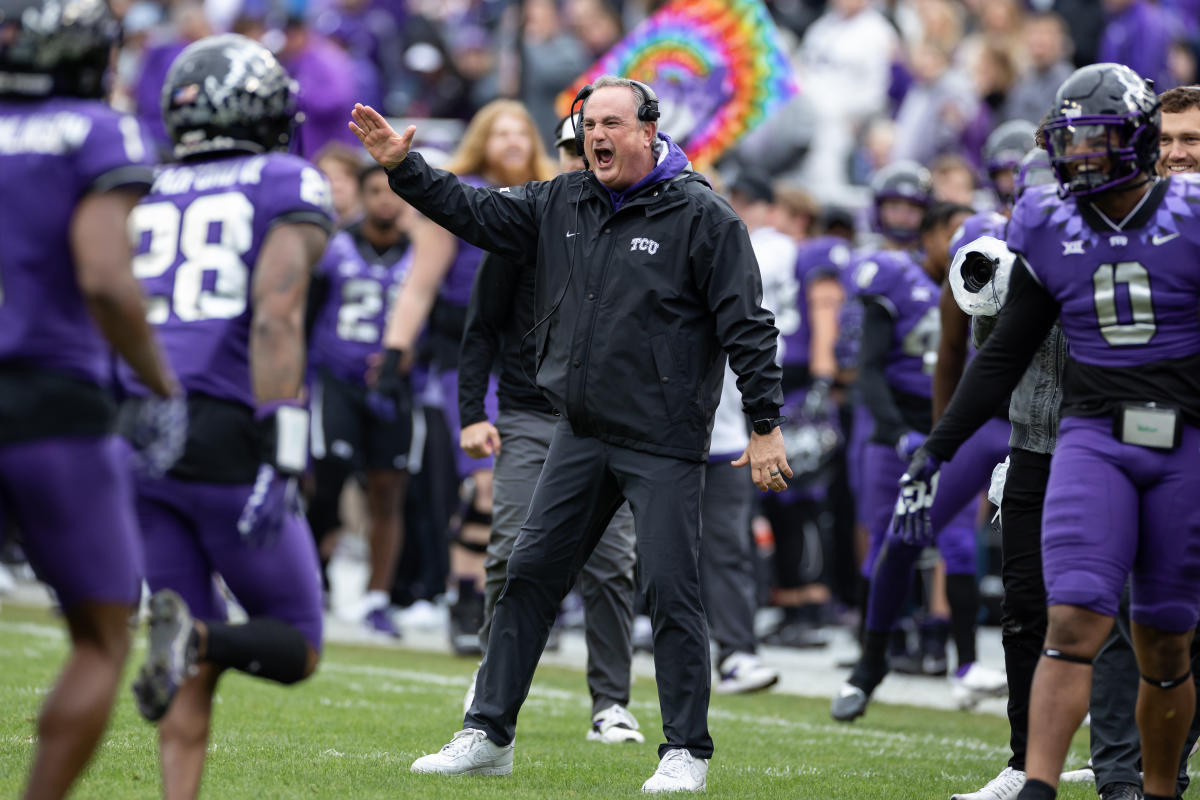 In 2014, TCU entered the final week of the season, finishing third in the College Football Playoff Selection Committee. He defeated Iowa State 55-3 to go 11-1. The Horned Frogs dropped to sixth place the next day, being eliminated from the playoffs, and were replaced by Ohio State.

One of the stated reasons was that the Buckeyes had won the Big Ten championship game 12-1 and were thus able to submit the so-called “13th data point” in 12 TCU games. The Big 12, which had only 10 members, was at the time prohibited by NCAA rules from having a league title match (requiring 12 members).

This was a cruel insult to TCU.

“It’s clear that we were fined for not having a championship game,” then-Big 12 commissioner Bob Boulsby said at the time. “It would be nice to know about it in advance. We were told that we have a different model.”

The Big 12 later petitioned for a rule change and added a title game for the 2017 season to give their top two teams a 13th game.

Well, we’re going to find out.

TCU again entered the last weekend of the college football season with a third-place finish, but this time with a 12-0 record. None of the teams behind him – No. 5 in Ohio State, No. 6 in Alabama, No. 7 in Tennessee, and No. 8 in Pennsylvania – qualified for their championship games and were thus stuck at “12th data point”.

If there hadn’t been a Big 12 title game — a game created because 12 games were considered too few — then TCU would have made the playoffs. The committee considered him superior to others.

There was a game, however, and TCU lost in overtime to Kansas State, 31–28.

This is going to be the biggest college football playoff game… ever.

Does that leave the committee to decide if 12-1 TCU will stay in the field or be replaced by 10-2 Alabama? It would also spark a heated argument from the 10-2 Tennessee, who believe she should be above Bama based on her personal victory over Tide.

Here are the main arguments.

The first one is based on logic, namely that no team should be penalized for a 13th game when the team it’s being matched against only played 12. If the committee thinks TCU and USC are outperforming Ohio State, Alabama, and others after 12 games, then it makes no sense to force them – and only them – to play the 13th game and then punish them for it.

Why should TCU (or USC) have an additional and unjustified burden of proof?

This makes intellectual sense and is a sound argument. However, the committee has not historically subscribed to this and there is no indication that they even knew about it, let alone found any appeal in it.

So USC is almost certainly out of the playoffs and TCU is on the brink of ruin. What should happen and what will happen are not the same thing.

So TKU? Here is the case of Horned Frogs v. Alabama.

He has 12 wins, two more than Tide. The only loss to Kansas State came at a neutral field. He previously defeated the Wildcats 38-28. It has excellent recording power. And the 10-3 Wildcats are likely to move up a peg or two from their 10th spot in the rankings, possibly even edging out Penn State from 8th.

Losing in overtime on a neutral field to a team from the top 10, according to the criteria of the committee, is not Badly the loss.

Again, what are the criteria? CFP has so many that it doesn’t actually have criteria. He can select teams based on analytics and formulas, good wins or bad losses, perceived defensive or offensive strength, injuries, losses, record strength, the proverbial eye test, and so on.

They can justify – and will – any decision.

Well, Tide’s two losses came in the final game, on the road against Tennessee and LSU. (Even the diehard Frog fans think they could do better?).

Tide handled everything else. Even if they lost, the Tide offense led by quarterback Bryce Young played well. Yang, who was injured, is now healthy. Sheer talent on the list far surpasses Horned Frogs. Vegas will make Alabama the favorite in head-to-head matches. TV ratings. Nick Saban. Doctor Pepper. Aflak. Who knows?

Indeed, the committee can tell itself anything.

Is TCU more worthy? Of course, by many standards. Did he do more to earn a spot? Absolutely.

This is the best team… uh, probably not. And therein lies the problem.

Are these the top four teams or the top four, and if they are the “best” by what standards?

On the other hand, if the committee is going to argue that it should put Alabama above TCU because it needs four (subjectively chosen) “best teams”, then how does it justify placing Alabama over Tennessee when it was clearly determined that the Vols were better? than Tide by actually beating them in a game?

Again, whatever you want.

This system is so bad, so inconsistent, so inconsistent, and so cornered by its stupid decision to put on a weekly ratings show, that reversals and reimaginings are moot that no one can know what might happen.

TCU can be safe. TCU can be cooked. Bama may return. Bama can dream. Tennessee will probably just be bitter.

Luckily, next season will be the last of a four-team, playoff system created by people who were forced to create a playoff and thus made a terrible playoff.

As far as TCU is concerned, 12 games was once too few, now 13 might be too many, and get rid of all this fiasco.

Jaquez leads No. 9 UCLA past Washington to end 2-game skid